The Law of Supply & Demand, Taxes and Interference

Here is the latest regional real estate update as far as the residential market goes in the Okanagan Shuswap - and insight from our president about the latest government actions that will impact the market, and your personal investment.

KELOWNA, B.C. – April 6, 2018. Residential sales across the region of Revelstoke to Peachland rose to 628 in March, 25% over the previous month, yet down 24% from this time last year, reports theOkanagan Mainline Real Estate Board (OMREB).

“While the market was busier than February, as is the norm this time of year, sales were substantially down from last March. At this point, it’s difficult to know whether or not this is significant or if it is simply an anomaly.” says OMREB President Tanis Read.

Average price was $521,192, up just 2% over February and 10% higher than this time last year. Days on market, or the time it takes to sell a home, averaged 78 fewer in March than February’s 89, but consistent with last year’s 79 days.

New listings, at 1393, were 53% higher than last month, but just 3%more than last March’s tally of 1353.“If we were to focus solely on sales volume, we might anticipate movement towards a balanced market, although current housing inventory is nowhere near what it would need to be to meet the definition of such a market.

However, average price, days on market and new listings are all generally consistent with this time last year, so it’s anybody’s guess as to whether or not March’s stats are the beginning of a trend,” says Read.

On that note - we add this graph  depicting the Months of Home inventory on the market at points in time relative to the sales demand.  Demand was at an all time low in January 2009 - when it would have taken over 31 months to exhaust supply . 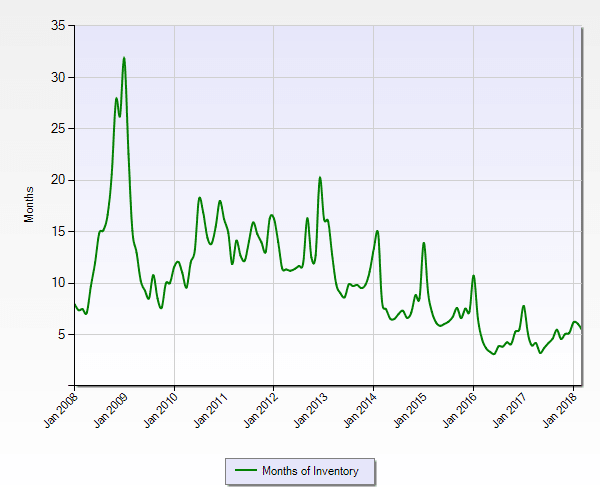 In the time period shown - the supply versus demand ratio hit its lowest point in  May of 2017 - with a projection of only 3.22 months inventory available at demand.

Read notes a number of external factors that could impact the market, not the least of which is the announced BC government’s housing-related taxes, including the controversial speculation tax, which isn’t really a tax on speculators, but rather a tax on assets.“If implemented, the BC government’s housing-related taxes, coupled with recent federal mortgage tightening rules and interest rate hikes, could be the tipping point that takes the market from a gradual downturn to a potentially steep decline,”

Read cautions.“When you tinker with the market, you can’t predict or control what will happen, nor can you put a halt to it. At the end of the day, these proposed housing-related taxes are bad for B.C and, while recently announced housing-related taxes are aimed at enhancing affordability, they may have the opposite effect, harming the very people the government is trying to protect and support.”

A recent British Columbia Real Estate Association Market Intelligence Report notes that ‘even a relatively minor 10% negative shock to home prices would extinguish $90 billion of (BC homeowners’)wealth, or $70,000 of the average homeowner’s equity.’ Falling home prices could severely impact the BC economy, with declining household wealth leading to reduced consumer spending and job loss. A drop in housing demand would curtail home construction, slowing expansion of housing supply and leading to more critical shortages in future.

First, a slower economy reaps fewer jobs which means that, even if houses are available at lower prices,fewer folks will have the means to buy them.

Second, a lack of housing supply means competition for available units for the folks who can still afford to buy, which drives up prices.”Read contends that increased housing affordability, a concept that OMREB and its members strongly support, is more likely to be achieved through other means such as addressing factors that have chronically prevented supply from keeping up with demand.

Read notes that the focus over the past several years, both federally and provincially, has solely been on the demand side, with little to no attention paid to the supply side of the equation.With so many factors impacting the market, conditions are tricky and buyers and sellers are advised to engage a local real estate professional whose job it is to stay abreast of conditions and who has the knowledge to analyze and accurately interpret market implications. (We can help with that!)